You are here: Home > Produits > A guide to the Luxembourg-Germany tax treaty 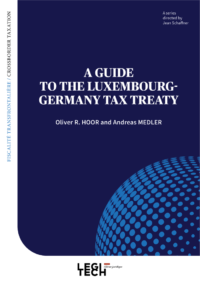 A guide to the Luxembourg-Germany tax treaty

Bilateral tax treaties are a cornerstone of the international tax landscape and play a vital role in the global economy, attempting to reconcile the complex and ever-changing domestic tax laws of the contracting states. The main purpose of tax treaties is to foster cross-border investment and business activities albeit the more recent focus of the OECD was on the tackling of perceived tax treaty abuses.

The tax treaty concluded between the Grand Duchy of Luxembourg and the Federal Republic of Germany (the “Tax Treaty”) entered into force on 30 September 2013 and became effective as from 1 January 2014, replacing the former tax treaty signed back in 1958. The Tax Treaty was largely drafted along the lines of the 2010 version of the OECD Model Tax Convention. The Tax Treaty is further complemented by a protocol that forms an integral part of the Tax Treaty.

This guide provides a clear understanding of the Tax Treaty and anticipates the changes resulting from the OECD Multilateral Convention to Implement Tax Treaty Related Measures to Prevent Base Erosion and Profit Shifting (« Multilateral Instrument” or “MLI”). Charts, overviews and checklists will accompany the reader in assessing the vital elements to consider in each tax analysis. Tax advisers and practitioners should gain substantially from the insights provided in this book.

Does Europe have a future?