You are here: Home > Produits > The Mongol Conquests in World History 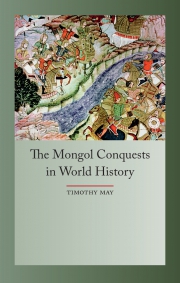 The Mongol Conquests in World History

The Mongol Empire (c. 1200-1350) in many ways marks the beginning of the modern age, as well as globalization. While communications between the extremes of Eurasia existed prior to the Mongols, they were infrequent and often through intermediaries. The rise of the Mongol Empire changed everything: through their conquests the Mongols swept away dozens of empires and kingdoms and replaced them with the largest contiguous empire in history.

While the Mongols were the most destructive force in the pre-modern world, the Pax Mongolica had stabilizing effects on the social, cultural and economic life of the inhabitants of the vast territory, allowing merchants and missionaries to traverse Eurasia. The conquests also set in motion other changes in warfare, medicine, food, culture and scientific knowledge.

When Mongol power declined, it was replaced with over a dozen successors who retained elements of the Mongol Empire, but none of its unity. The Mongol Conquest in World History examines the many ways in which the conquests were a catalyst for change. The memory of the Empire fired the collective mind into far-reaching endeavours: the desire for luxury goods and spices that were once available launched Columbus’ voyages; the Renaissance was inspired by the innovations in art that emerged from the Mongol Empire: China was unified for the first time in 300 years and the Islamic world doubled in size.

This fascinating book offers comprehensive coverage of the entire empire, rather than a more regional approach, as well as providing a long view of the Mongol Empire’s legacy. It will appeal to all those interested in this vast, epoch-making empire, as well as specialists in the field.